1.IntroductionAmmonium sulfate, (NH4)2SO4, isan inorganic salt witha number of commercial uses. The most common use is as a soil fertilizer. Itcontains 21% nitrogen and 24% sulfur. 2.UseageThe primary use of ammonium sulfate is as a fertilizer for alkaline soils. In the soil the ammonium ion is released and forms a small amount of acid, lowering the pHbalance of the soil, while contributing essentialnitrogen for plant growth. The main disadvantage to the use ofammonium sulfate is its low nitrogen content relative to ammonium nitrate, whichelevates transportation costs.It is also used as an agricultural spray adjuvant for water-soluble insecticides, herbicides, and fungicides. There, it functions to bind iron and calcium cations that are present inboth well water and plant cells. It is particularly effective as an adjuvantfor 2,4-D (amine), glyphosate, and glufosinate herbicides.Laboratory use:

In biochemistry, ammonium sulfateprecipitation is a common method for purifying proteins by selective precipitation; Ammonium sulfate is extremely soluble inwater and so can make very concentrated solutions, which can "saltout" proteins, causing their precipitation at particular concentrations.This provides a convenient and simple means to fractionate complex proteinmixtures. As such, ammonium sulfate is also listed as an ingredient for manyUnited States vaccines per the Center for Disease Control.In the analysis of rubber lattices, volatile fattyacids are analyzed by precipitating rubber with a 35% ammonium sulfatesolution, which leaves a clear liquid from which volatile fatty acids areregenerated with sulfuric acid and then distilled with steam. Selectiveprecipitation with ammonium sulfate, opposite to the usual precipitationtechnique which uses acetic acid, does not interfere with the determination ofvolatile fatty acids.Food additive:As a food additive, ammonium sulfate is considered generallyrecognized as safe (GRAS) by the U.S. Food and DrugAdministration, and in the European Union it is designated by the E number E517. It is used as an acidity regulator in flours and breads.Other uses:Ammonium sulfate is used on a small scale in thepreparation of other ammonium salts, especially ammonium persulfate.A saturated solution of ammonium sulfate in heavy water (2H2O) is used as an external standard in sulfur (33S) NMR spectroscopy with shift value of 0 ppm.Ammonium sulfate has also been used in flame retardant compositions acting much like diammonium phosphate. As a flame retardant, itincreases the combustion temperature of the material, decreases maximum weightloss rates, and causes an increase in the production of residue or char.[10] Its flame retardant efficacy can be enhanced by blending it with ammonium sulfamate.Ammonium sulfate has been used as a wood preservative,but due to its hygroscopic nature, this use has been largely discontinuedbecause of associated problems with metal fastener corrosion, dimensionalinstability, and finish failures.3.PreparationAmmonium sulfate is made by treating ammonia, often as a by-product from coke ovens, with sulfuric acid:2 NH3 + H2SO4 → (NH4)2SO4A mixture of ammonia gas and water vapor is introducedinto a reactor that contains a saturated solution of ammonium sulfate and about2 to 4% of free sulfuric acid at 60 °C. Concentrated sulfuric acid is added tokeep the solution acidic, and to retain its level of free acid. The heat ofreaction keeps reactor temperature at 60 °C. Dry, powdered ammonium sulfate maybe formed by spraying sulfuric acid into a reaction chamber filled with ammonia gas. The heat of reaction evaporates all water present in the system,forming a powdery salt. Approximately 6000M tons were produced in 1981.Ammonium sulfate also is manufactured from gypsum (CaSO4·2H2O). Finely divided gypsum isadded to an ammonium carbonate solution. Calcium carbonate precipitates as a solid, leaving ammonium sulfate in thesolution.(NH4)2CO3 + CaSO4 → (NH4)2SO4 + CaCO3Ammonium sulfate occurs naturally as the rare mineral mascagnite in volcanic fumaroles and due to coal fires on some dumps.Properties:Ammonium sulfate becomes ferroelectric at temperatures below -49.5 °C. At room temperature it crystallises inthe orthorhombic system, with cell sizes of a = 7.729 Å, b = 10.560 Å,c = 5.951 Å. When chilled into the ferrorelectric state, the symmetry of thecrystal changes to space group Pna21.Reactions:Ammonium sulfate decomposes upon heating above 250 °C,first forming ammonium bisulfate. Heating at higher temperatures results indecomposition into ammonia, nitrogen, sulfur dioxide, and water.As a salt of a strong acid (H2SO4) and weak base (NH3), its solution is acidic; pHof 0.1 M solution is 5.5. In aqueous solution the reactions are those of NH4+ and SO4−2 ions. For example, additionof barium chloride, precipitates out barium sulfate. The filtrate on evaporation yields ammonium chloride.Ammonium sulfate forms many double salts (ammonium metal sulfates) when its solution is mixed with equimolarsolutions of metal sulfates and the solution is slowly evaporated. Withtrivalent metal ions, alums such as ferric ammonium sulfate are formed. Double metalsulfates include ammonium cobaltous sulfate, ferrous diammonium sulfate, ammonium nickel sulfate which are known as Tutton's salts and ammonium cericsulfate.Anhydrous double sulfates of ammonium also occur in the Langbeinites family.

Qingdao Hisea Chem Co., Ltd is a famous chemical manufacture since 1996, located in Chemical Logistics Park of China Qingdao port which is only 30 kilometers from the Qingdao port, and the traffic is very convenient.

Based on the oil refining chemical plant of CNPC and Sinopec which distributed around of China,we product Glacial acetic acid, Formic acid, Nitric acid and hydrogen peroxide, and we produce sodium hydroxide,potassium hydroxide,sodium sulfide, potassium sulfate based on salt, potassium, magnesium, coal resources from the lop nurand the Qinghai lake .Reduplicating distillation the acids and the solvents and improving the product purity is to reach each field application, textile ,reagent and medical level etc.It is our top advantage to provide the high purity of products and make customized production according to the customer's requirements.We have our own packaging cans, have their own packaging factory, can better meet customer needs. 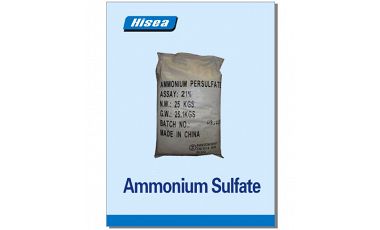