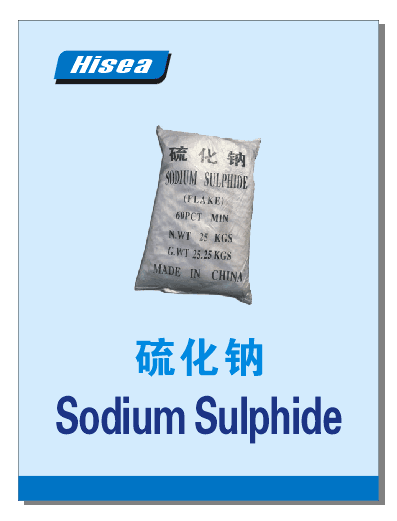 Sodium sulfide is the chemicalcompound with the formula Na2S,or more commonly its hydrate Na2S·9H2O. Both are colorless water-soluble salts thatgive strongly alkaline solutions. When exposed to moist air,Na2S and its hydrates emit hydrogensulfide, which smells like rotten eggs. Some commercial samples arespecified as Na2S· xH2O, where a weight percentage of Na2S is specified. Commonly available grades have around 60% Na2S by weight, which means that xis around 3. Such technical grades of sodium sulfide have a yellow appearanceowing to the presence of polysulfides. These grades of sodium sulfideare marketed as 'sodium sulfide flakes'. Although the solid is yellow,solutions of it are colorless.

Na2S adopts the antifluoritestructure, which means that the Na+ centers occupy sites of thefluoride in the CaF2 framework, and the larger S2− occupythe sites for Ca2+.

In the laboratory, the salt canbe prepared by reduction of sulfur with sodium in anhydrous ammonia.Alternatively, sulfur can be reduced by sodium in dry THFwith a catalytic amount of naphthalene:

Sodium sulfide can also beproduced by the reaction with sodium cyanide and sulfuric acid, however, toxic hydrogencyanide is formed in the process.

The dissolution process can bedescribed as follows:

Sodium sulfide can oxidize whenheated to sodium carbonate and sulfurdioxide:

Upon treatment with sulfur,polysulfides are formed:

Sodium sulfide is primarily usedin pulp and paper industry in the Kraft process.

It is used in water treatment asan oxygen scavenger agent and also as a metals precipitant, in chemicalphotography for toning black and white photographs, in textile industry as ableaching, and as a desulfurising and as a dechlorinating agent and in leathertrade for the sulfitisation of tanning extracts. It is used in chemicalmanufacturing as a sulfonation and sulfomethylation agent. It is used in theproduction of rubber chemicals, sulfur dyes and other chemical compounds. It isused in other applications including ore flotation, oil recovery, making dyes,and detergent. It is also used for leather processing in liming operation asunhairing agent.

Like sodiumhydroxide, sodium sulfide is strongly alkaline and can cause skinburns. Acids react with it to rapidly produce hydrogensulfide, which is highly toxic.

Qingdao Hisea Chem Co., Ltd is a famous chemical manufacture since 1996, located in Chemical Logistics Park of China Qingdao port which is only 30 kilometers from the Qingdao port, and the traffic is very convenient.

Based on the oil refining chemical plant of CNPC and Sinopec which distributed around of China,we product Glacial acetic acid, Formic acid, Nitric acid and hydrogen peroxide, and we produce sodium hydroxide,potassium hydroxide,sodium sulfide, potassium sulfate based on salt, potassium, magnesium, coal resources from the lop nurand the Qinghai lake .Reduplicating distillation the acids and the solvents and improving the product purity is to reach each field application, textile ,reagent and medical level etc.
It is our top advantage to provide the high purity of products and make customized production according to the customer's requirements.We have our own packaging cans, have their own packaging factory, can better meet customer needs.